A few weeks ago we had a bit of a disaster. We collected my father from the aged care home and went to his unit to do a quick tidy up before a potential buyer came to have a look. Rachel and I sent my father outside with Colin and then we took some garbage bags and proceeded to clean and de-clutter every surface we could find. Within an hour we had the place presentable. Just as we were leaving I grabbed the esky to take another load of frozen food from my father's heavily laden freezer. The grand old lady is stored in the garage and is usually full to the brim, with all kinds of things, some mentionable and some not. Last time we were here I had taken some ducks (to be made into salad for Christmas), some rabbits (my father and his friend had trapped, dispatched and gutted) and some calamari he had caught (dated 2014, but maybe still OK?).

When I lifted the lid an almighty stench arose from the depths, a quick prod on something at the top and yep - soft and flabby, definitely not frozen any more. Colin checked and my father checked and we all agreed it was a bit of a disaster. We scrounged some large garbage bags and Colin did the manly thing and reached into the freezer to pull out the rotting contents. Rachel dutifully held the garbage bag as one by one each plastic bag of decaying food was disposed of.

A little explanation is required here. My father will happily eat pretty much any part of any animal and over the years he has accumulated a lot of body parts in that freezer. He also cooks large quantities of any meal and freezes the left overs. He puts them all in plastic bags with a piece of cardboard (cut from old cereal boxes) to label the contents. His written English is minimal so you have to have a bit of a guess at the spelling. I am now familiar with sosl, that means sauce, as in pasta, bon, that means bones, smok, that means smoked, stek, that means steak etc...

Rachel was a bit concerned at ok tal, surely thats not ox tail. Unfortunately it was possible. For a vegetarian it was very courageous of her to hold that bag. We filled five garbage bags. And a side note here. My father keeps things for a long time, even garbage bags, and they were beginning to perish and stuff was leaking on the garage floor. And when the labelled plastic bags and their nasty contents were removed from the freezer there was a bloody sludge left in the bottom. Colin tipped the freezer and I used a plastic jug to scoop out the offending liquid, trying not to gag in the process. Copious amounts of disinfectant were used in the clean up.

The next challenge was to get the stinking garbage to the tip. We lined the boot of my father's SUV with more plastic, just in case of seepage or spillage and very gingerly lifted the refuse into the boot.(P.S there is nothing separating the boot from the back seats) The windows were definitely all the way down as we left the unit. Rachel had her head stuck out the window for good measure. Unbelievably my father insists we stop off on the way to the tip to fill up with petrol and so he can deliver a bottle of his grappa to his friend at the petrol station. You have got to be kidding.

My father knows the bloke at the tip (of course) so we get in for free, we back the car to the concrete pit and throw the garbage bags in, where of course on impact they explode, stinking, rotting meat spraying debris far and wide. We make a hasty retreat. 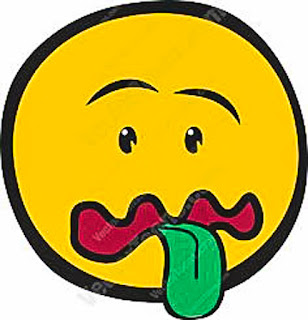